The "Witch's Hat" water tower is in Prospect Park(known as Tower Hill Park)
the highest natural land area in the city of Minneapolis. The Prospect Park water
tower is one of the few original water towers standing today in the Twin Cities area.
Here's the story if you're interested.
The Tower at 100
(1913 - 2013)
[Note: The following are notes (by Lois Willand, corrected by Joe Ring) from a talk given at Pratt Community School May 15, 2013 by Joe Ring on the occasion of the Tower Centennial.]
The property that we now call Tower Hill was platted as Tower Hill Park in 1892. The developer wanted to sell lots for residential development on the hill, but the lots were not selling.
PPERRIA, the Prospect Park East River Road Improvement Association, which formed in 1901, wanted to have the land used for a water tower, to help get better water pressure for homes. The developer at that point wanted to use the hill for gravel.
PPERRIA proceeded with its plan to purchase the hill for a water tower. The purchase price was $19,500 with a average cost of $47.50 per property owner. This amount would be equal to $3,000.00 in today’s dollars. The purchase was approved by the Minneapolis City Council, which named the land St. Anthony Park Heights.
Another tower had previously stood on the hill, probably in the years 1825 to 1870, as a military sentry tower whose purpose had been to control the caravans of oxcarts that formed by the river crossing at St. Anthony Falls and traveled east on Territorial Road to St. Paul. The oxcarts, which carried furs, grains and other trade goods that came from Canada, (what is now) North Dakota and the Red River Valley were driven by Metis people. St. Paul was their destination for selling their goods because its location was as far up the Mississippi as boats could travel at that time.
Elizabeth Duvay wrote in her journals written between 1845-1860 that her family used to travel from Mississippi to St. Anthony Falls for a summer trip, and would stop for a break at the hill with its sentinel tower.
In 1913, Frederick William Cappelen, a Norwegian-born architect and civil engineer who held the office of Minneapolis City Engineer, was approved to build a water tower on the hill. He designed a Romanesque Medieval style stand pipe water tower that was completed in the summer of 1914. The tower had windows part way up made of leaded glass.
The tower had a caretaker and was kept open in 1915. The caretaker was a friend of neighborhood children and was nicknamed “The Wizard”.
In 1915 triangles greens were authorized at the Clarence Ave and Malcolm Ave intersections with University Ave by the Minneapolis Park Board to complement the uniqueness of the Tower and Tower Hill Park.
By 1936 the boulder with the name “Prospect Park” was in place by the Park Board. The tower was taken out of service as a water tower in 1952, when the city installed high pressure pumps.
By 1955 the exterior was resurfaced and the windows had been removed or covered. Also that year, the tower was struck by lightning. The Minneapolis City Council planned to tear down the tower. Prospect Park residents did not agree with the decision, and engaged with city officials to successfully keep the tower intact. A group of Prospect Park Bluebirds (a junior branch of the Camp Fire organization), went door-to-door to obtain signatures on petitions against the tower’s destruction, and received some of the credit for “saving the tower”.
1986—the tower’s tile roof had deteriorated and needed replacement. The city, mindful of budget needs, planned to replace the expensive tile with shingles. Again, neighborhood activists prevailed and convinced the city it should use tiles for historical accuracy. Thus, the tower roof was repaired with tiles, fortunately made by the same company that fabricated the original tiles.
In the 1990’s, the tower was increasingly becoming a victim of graffiti. In 1995, when the city began its Neighborhood Revitalization Project (NRP) Prospect Park participated in the program through the improvement association, PPERRIA. Prospect Park resident Joe Ring and his wife Susan Thrash began a project to do daily cleanup of the graffiti. For two years they went to the tower daily, removing and painting over the graffiti. Joe and Susan formed a Tower Hill committee, and with funding from NRP, PPERRIA, and grants, undertook major improvements on Tower Hill, including new steps, new decorative light posts, new benches and picnic tables, walking path improvements, tree and shrub thinning for better views of the hill and from the hilltop. Lights inside the tower were paid for by PPERRIA, and the tower is now lighted at night, adding to its attractiveness and visibility as our neighborhood landmark. The pump house, located at the base of the hill across from Pratt School, was also restored in conjunction with the tower’s restoration.
In 1997 the Tower and Tower Hill Park were placed on the National Register of Historic Places.
A historic plaque was added in 1997 to the base of the Tower, which has helped reduce graffiti. 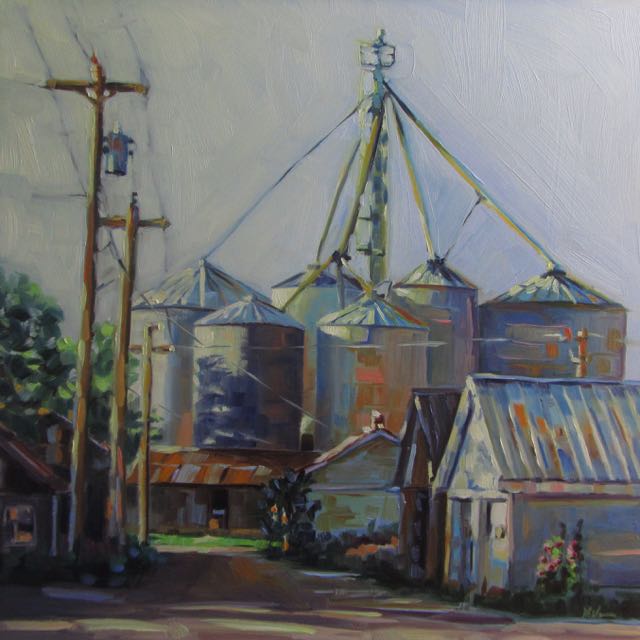 HAYDEN GRANARY
12" X 12"
OIL
Have a wonderful weekend. We got some snow we hope to be out skiing.
Thanks for looking - MB
Posted by MB WARNER/PAINTER at 4:39 PM No comments: Links to this post 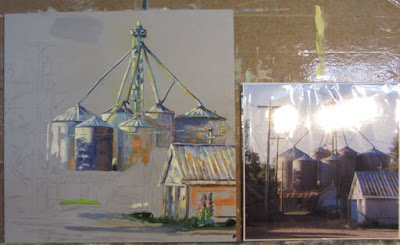 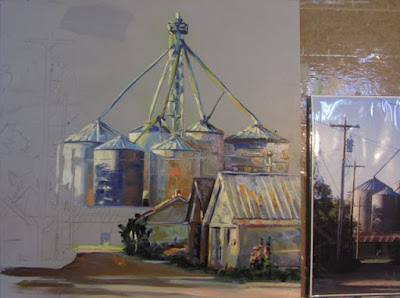 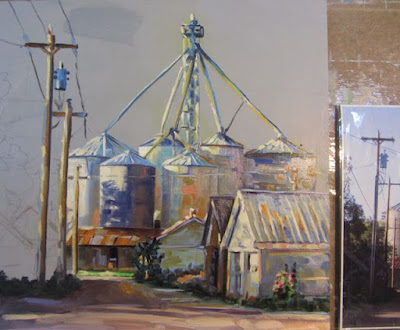 Here are 3 process shots of the Hayden Granary
the final painting tomorrow. 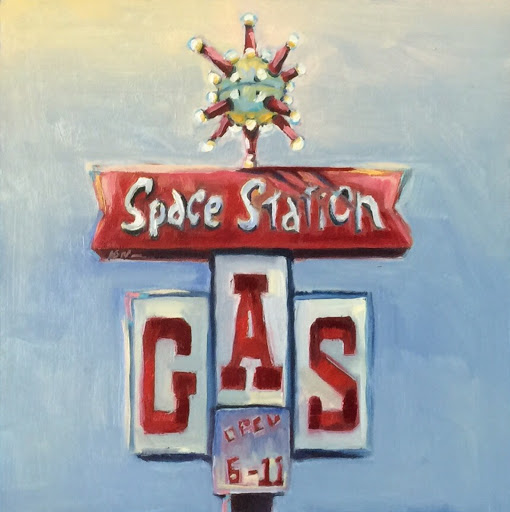 I felt like painting some Strawberry Park girls - I guess I'm thinking about springtime.
16"h X 8"w
Have a great weekend where ever you are and what ever you're up to!
Thanks MB 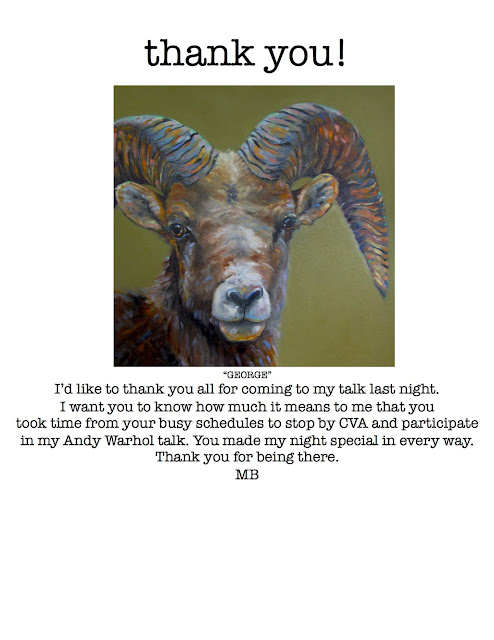 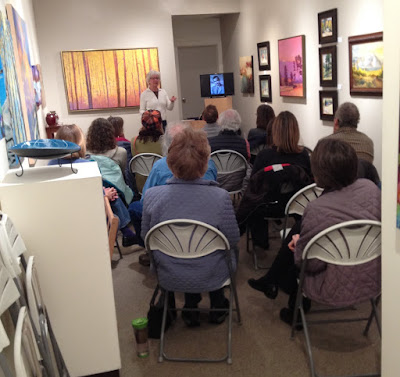 Posted by MB WARNER/PAINTER at 8:24 AM No comments: Links to this post 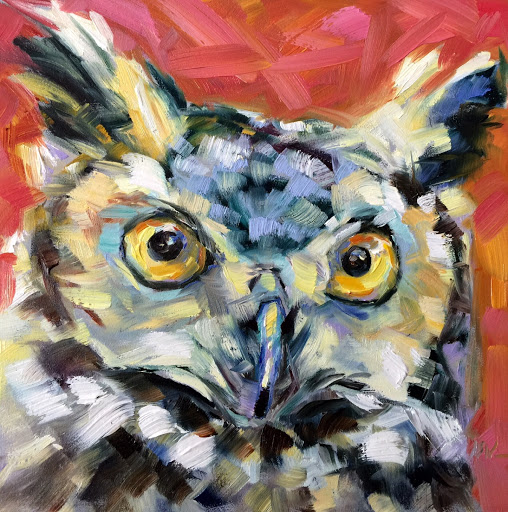 Here's my demo painting from First Friday.
Thanks for stopping by.
Posted by MB WARNER/PAINTER at 8:36 AM 1 comment: Links to this post

This is the view of Mount Werner from Yampa Ave.
12"h X 6"w
This painting is at Center for Visual Arts
837 Lincoln Ave. Steamboat Springs,CO.
Have a great weekend! 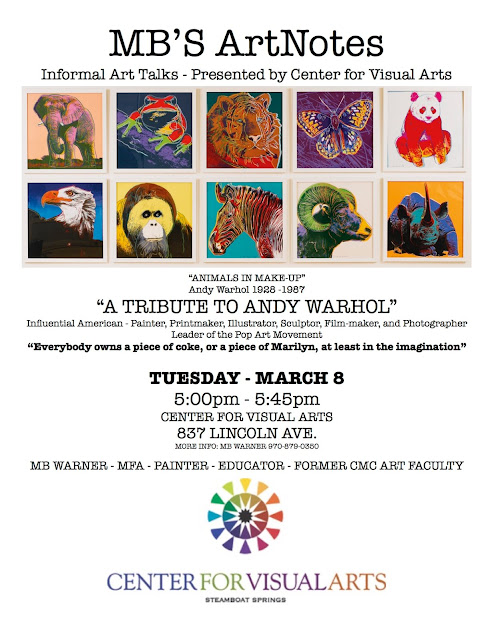 I laughed so hard - I hope this link makes your day
MB on STEAMBOAT TV
OR
HOW TO TALK MINNESOTAN - NO KIDDING!!!!!!!!!

Posted by MB WARNER/PAINTER at 2:43 PM No comments: Links to this post