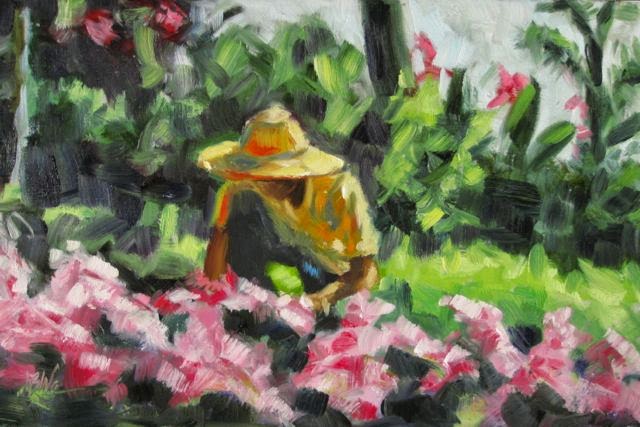 SINGAPORE BOTANIC PARK ORCHID GARDENER
I've started to look through my Singapore photos. Hard to
believe that in 2000 I was still shooting with film.
I must've shot 20 rolls. On occasion when I'm stuck I
might give Singapore a go. We'll see.
Thanks for following and commenting too.
Posted by MB WARNER/PAINTER at 5:13 PM 1 comment: 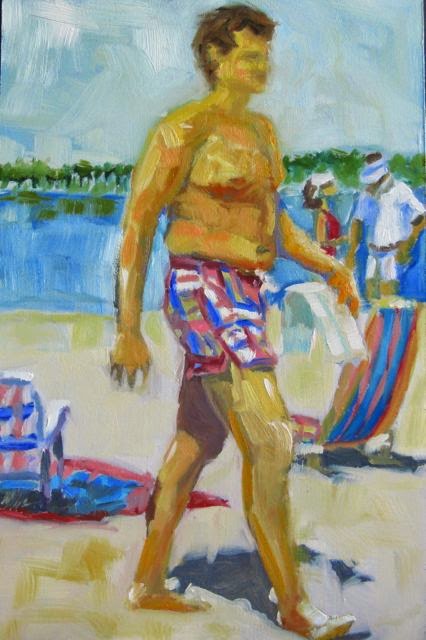 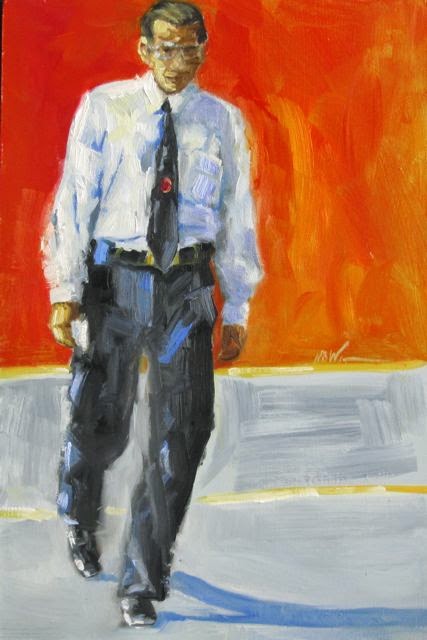 "BABY IT'S HOT OUTSIDE"
I visited Singapore a number of years ago. My husband
was working there so I thought I'd hop a plane and visit.
I brought 3 books to read - I got to Tokyo having read all
my books - didn't have enough yen to buy anymore(this was before
cell phones and heavy credit card usage - hard to believe I know)
I had to endure a delayed flight - nothing to read - and then I had to get
on another flight just about as long as the first.
Meanwhile, we were all stuck in a huge holding tank - so when they
announced the plane was boarding there was total chaos.
The airline attendant didn't call seat rows
it was literally a free for all.
If these passengers could've brought their chickens
they would've. An experience like no other. Sit where ever you like.
I got to Singapore - where it is against the law to chew gum
it's true - and it was 104 degrees(on a cool day).
What was I thinking??????!!!!!!!!!!
I lived through it but did'nt want to get on a flight home 2 weeks later.
To this day a flight to Paris is nothing in comparison.
Got home and there were raccoons in my house due to the cat door.
The cats were gone - my house was a mess and my cat sitter
was mortified to say the least. I guess I had to pay her anyway.
That's my story and I'm sticking to it.
Thanks a bunch

Email ThisBlogThis!Share to TwitterShare to FacebookShare to Pinterest
Labels: MAN IN SUIT, MB WARNER, OIL PORTRAIT, PAINT EVERY DAY OR NOT, STEAMBOAT SPRINGS 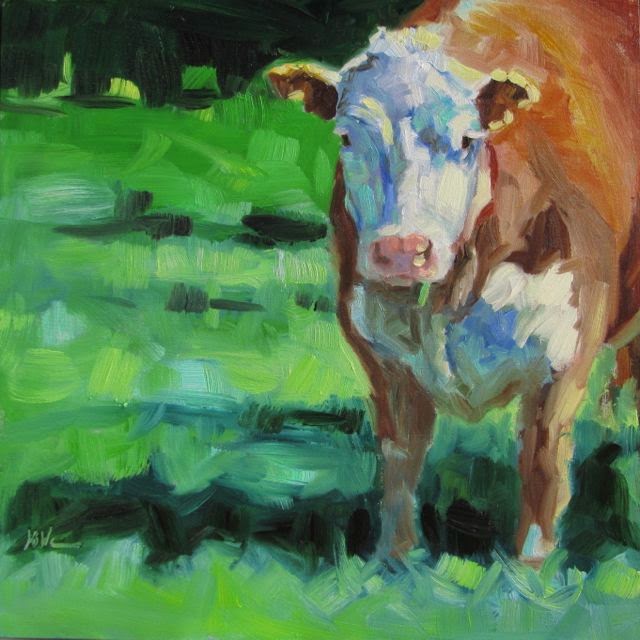 "20 MILE ROAD"SOLD
I have so many cow portraits I really didn't need another
but I love to paint them. This one is available - let me know
if you need a cow on your wall.
Cherries are all available too
might make a nice present for someone.
That's my story and I'm sticking to it!
Thanks for following I hope you enjoyed this
weeks installment. It's nice to mix it up.
Have a great weekend and thanks for following. 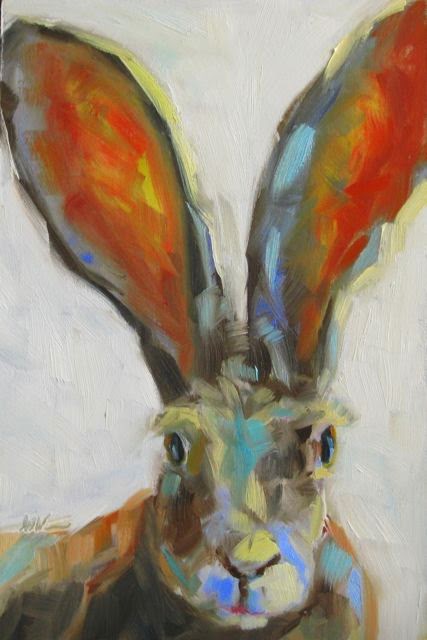 "RABBIT"
OK - so one of my followers mentioned a jack rabbit
and I thought painting a jack rabbit would be fun and challenging.
Well that's putting it mildly.
I've only seen 3 jack rabbits in my life and they don't stick around
long for any kind of photo op.
I've been busy painting and wiping - painting and wiping.
It's been a no go, frustrating time for sure.
We went away for 3 weeks and when I got back all
hell broke loose. Well that's another story.
I'm back and I'll try to get it together!
Thanks for following and waiting.

"IT'S NOT ABOUT THE SALE" 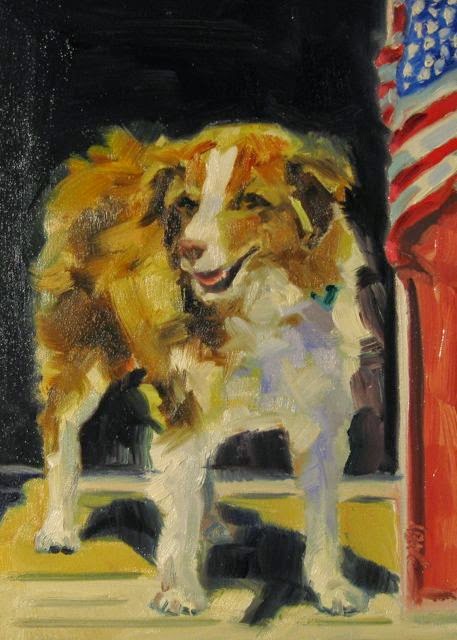 "DECORATION DAY"
Memorial Day was first observed in 1868
when it was called Decoration Day
A day set aside to honor the
600,000 U.S. men and women who died in the Civil War.
Millions more have served since
and many have made the ultimate sacrifice.
Posted by MB WARNER/PAINTER at 7:28 PM 1 comment: 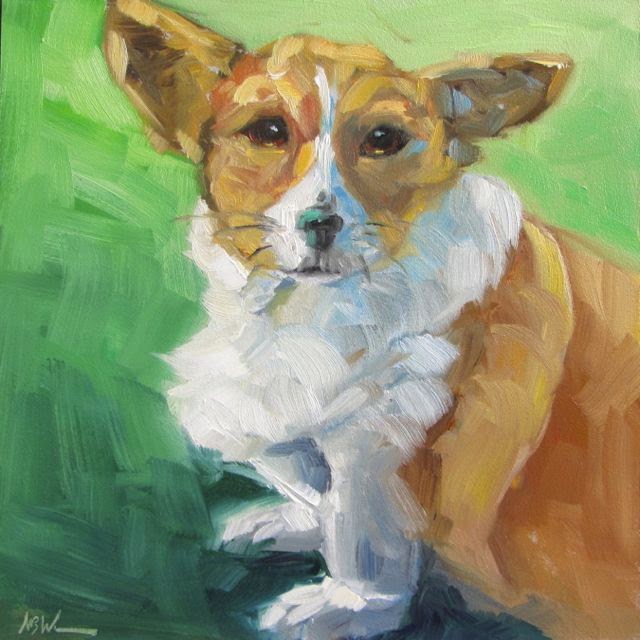 GEORGI'S MOM
Gracie was the best mom - can you tell?
What a sweet dog.
Georgi takes after her in every way - well maybe not the ears.
Gracie now lives in Alaska.
thanks