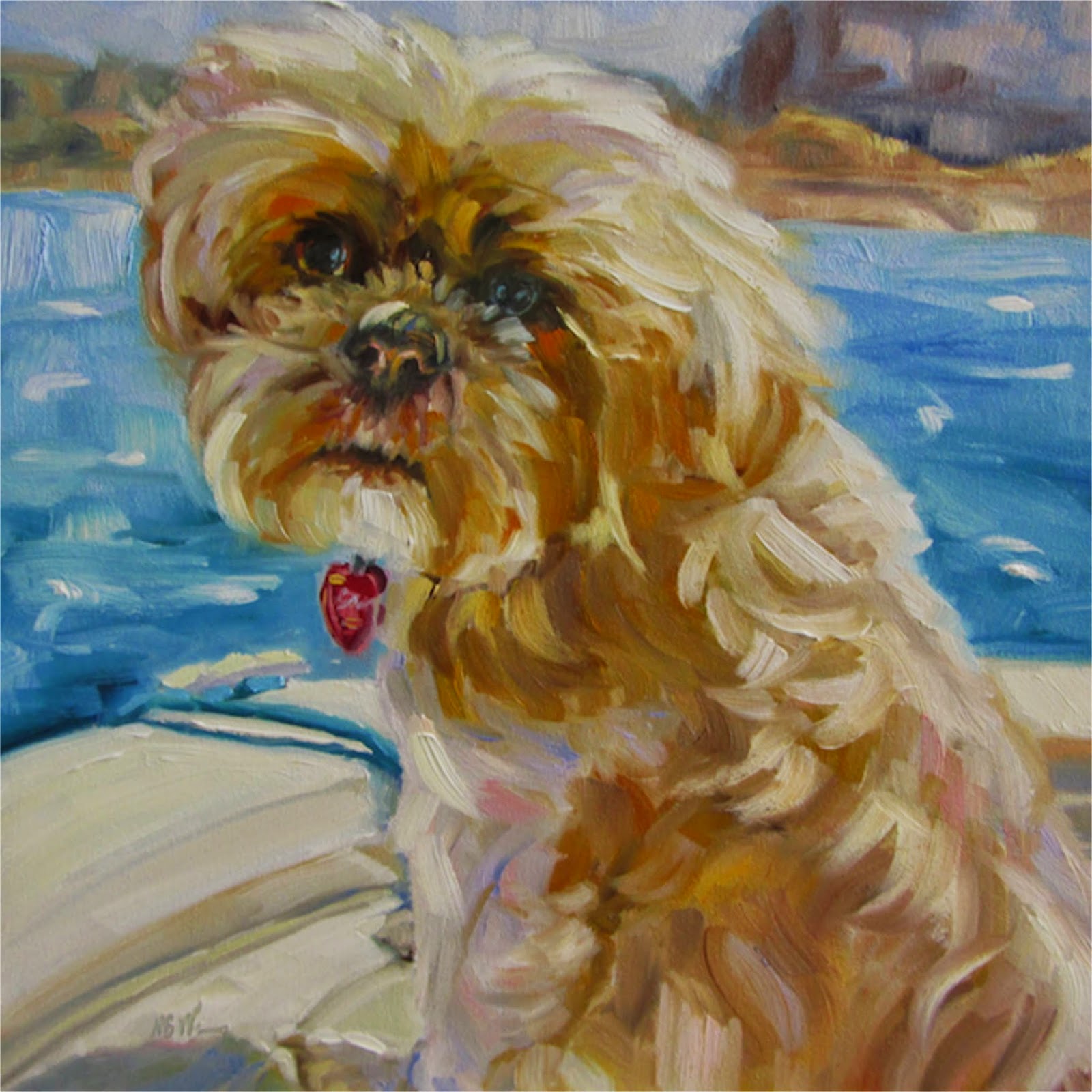 Here's what Sadie's family says about her:
I've had several dogs through the years and a couple horses, but this little dog meant more than all of them combined. Enough that I actually had her exact paw print tattooed on my foot so a bit of her would always be with me. I got her when I was 12 and she passed away at 15 yrs on December 30th.

Sadie was a complete snuggle bug, but secretly throught she was a Golden Retriever. She played fetch with a full sized tennis ball, and spent more time in the water than our actual Golden did. Yet, she had a major soft spot for pillows, always finding the optimum napping spot (usually on my face). She went everwhere with me, to college in Fort Collins, forced to endure the crazy antics of college kids; to grad school in San Diego where she rode around in my cruiser bike basket; to my adventures in Washington DC. And this doesn't even include all the numerous family vacations we took her on, especially to Lake Powell where she joined me on the wave runner, tubing, stand up paddle boarding, and lounging on the beach.

She's had any manner of haricuts, but was mostly a medium length. She lost her left eye in May 2005 (she was 5yrs) while out at the horse barn (I think she ran into some barbed wire), and spent the majority of her life blind in that eye. Dr. Gotchey worked his magic and saved the eye, leaving her with a vibrant blue left eye.

Sadie loved to sing (to the annoyance of my parents, especially when she got Chuck singing too). Everyone loved her, and almost got kidnapped on numerous occasions by friends who decided they wanted her for themselves. Sadie was such a wonderful, special dog, that she turned numerous "big" dog purists into small dog fans. Biscuit and Kiwi McCaulley owe their wonderful life at the McCaulley home to Sadie who thoroughly won over Marilyn to small dogs. She was among the first to convert, but certainly not the last.

Posted by MB WARNER/PAINTER at 6:40 PM No comments: 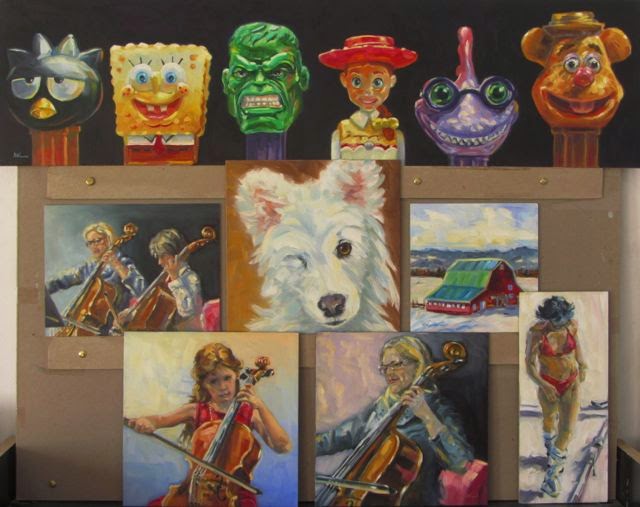 This will give you some idea of scale. It's fun to paint
different size formats. Keeps it interesting.
Have a great weekend and thanks for following. 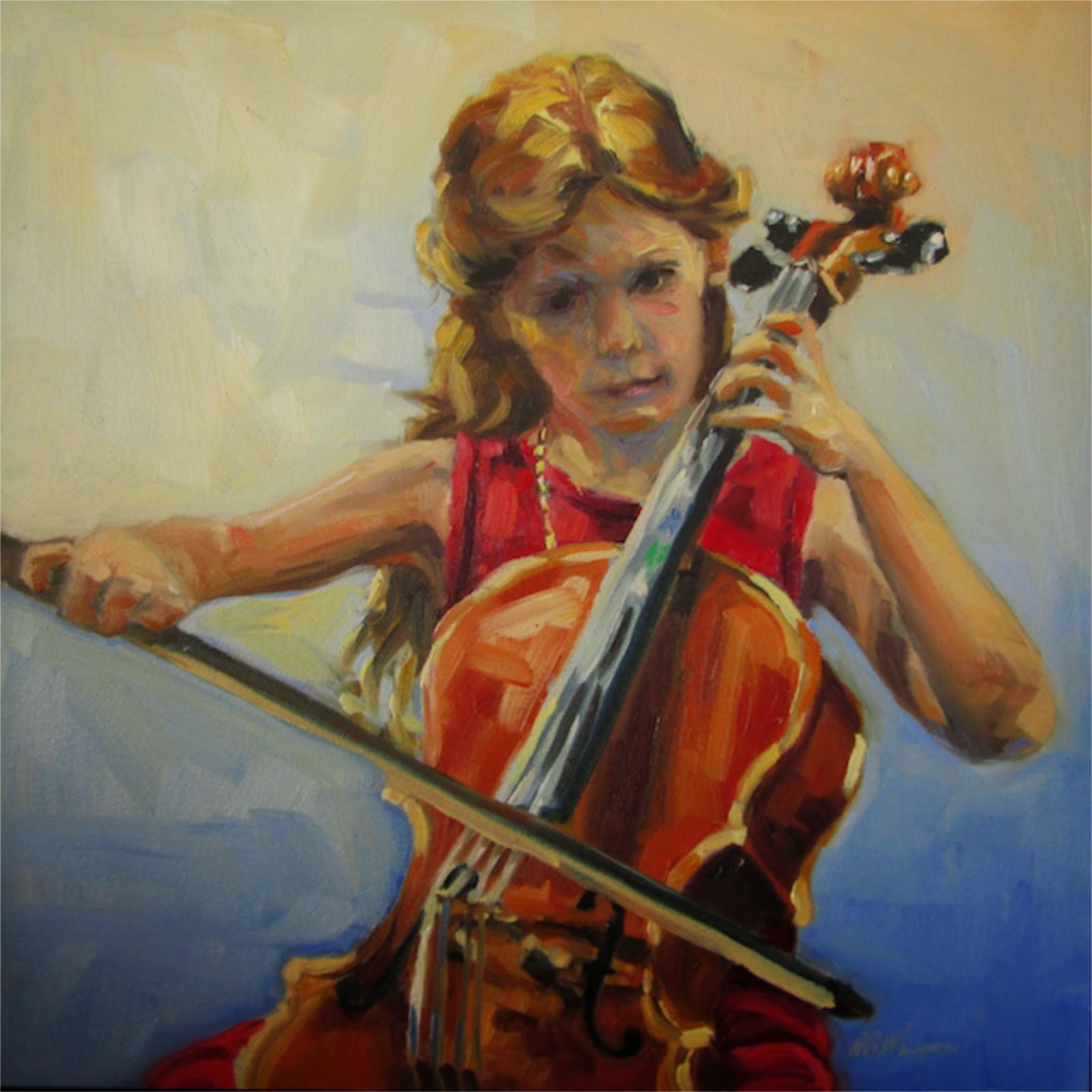 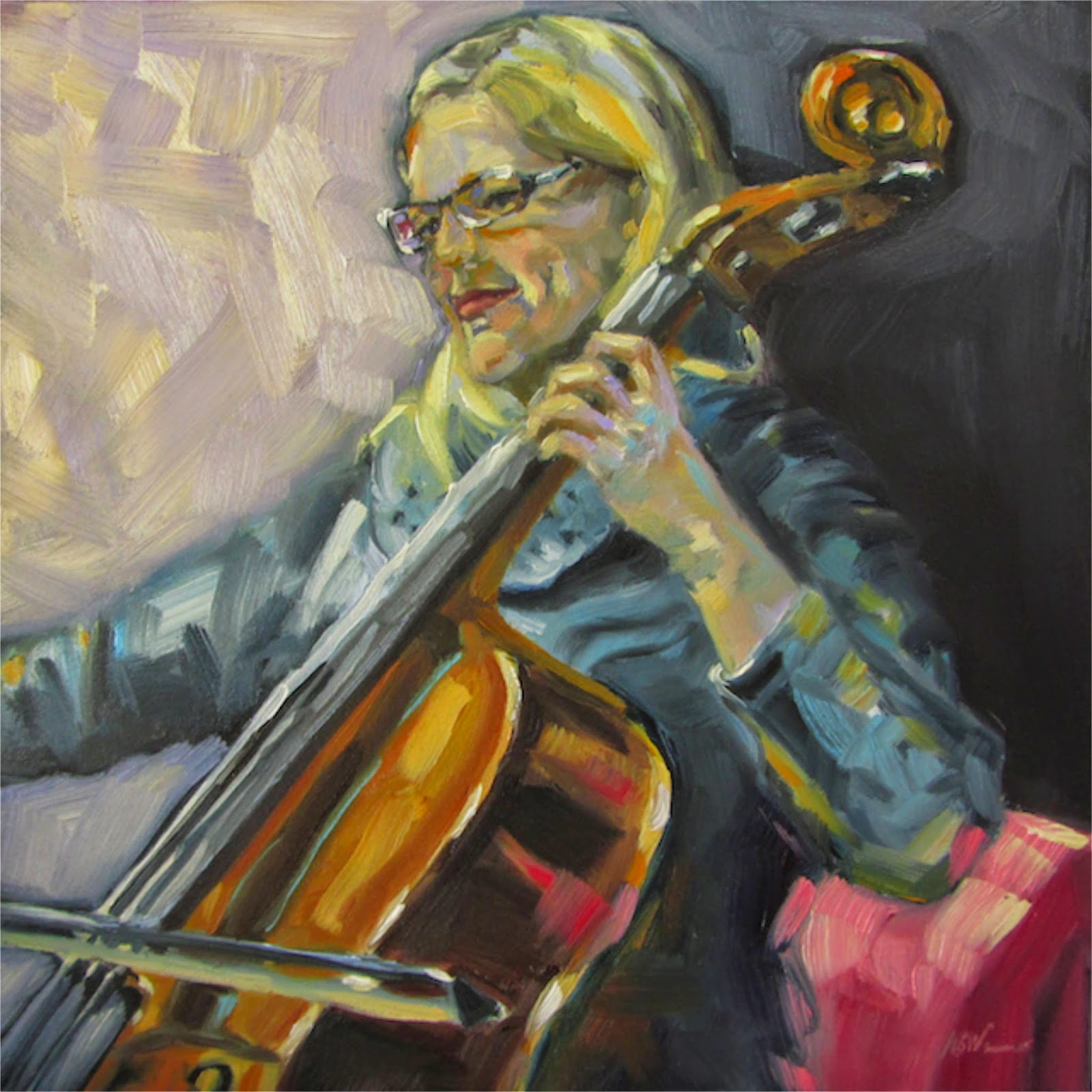 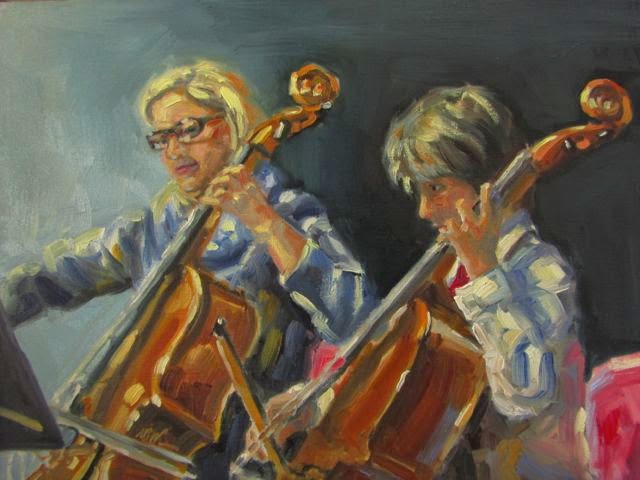 I was invited to a cello book recital. This was the only photo I
got of Mason and his teacher playing the accompaniment
for a piece his sister was playing on center stage.
It was a spectacular moment in time, not to be forgotten.
These kids are truly amazing musicians.
They are so much fun to watch. There is nothing like a live performance.
So much talent and dedication - it was a wonderful and inspiring evening.
Thanks for looking!

"CHEEZE"
8"h X 30"w
oil on panel
Available for sale on my website
Thanks for taking a look.
Have a great weekend.
Some details below for your viewing pleasure. 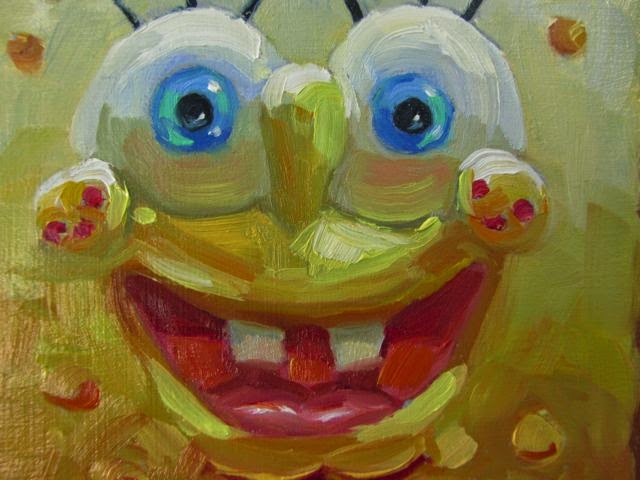 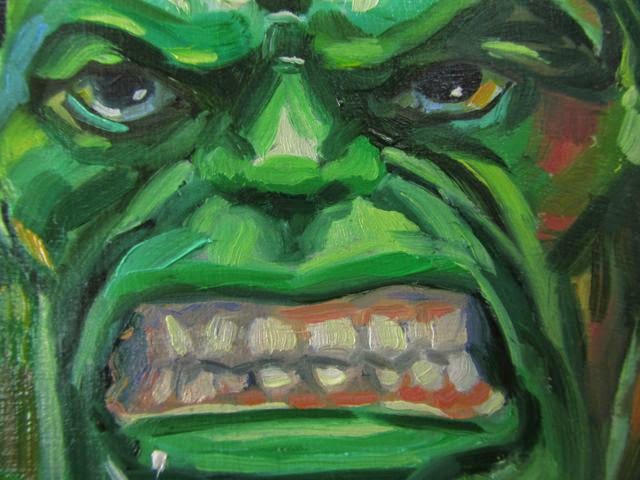 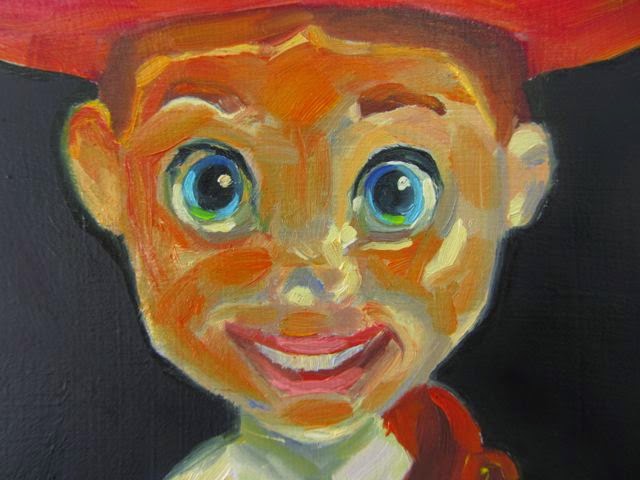 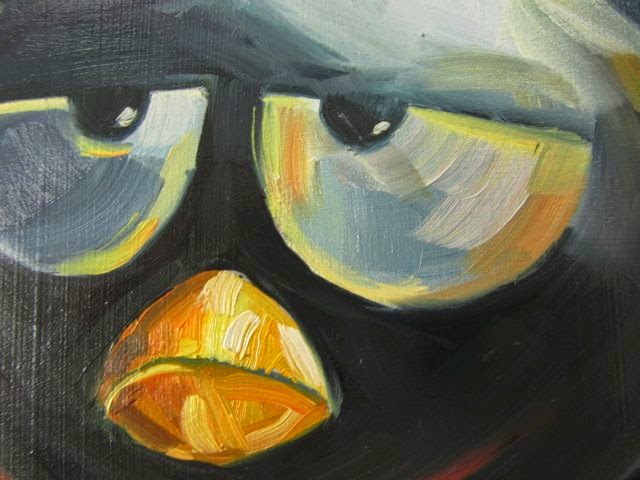 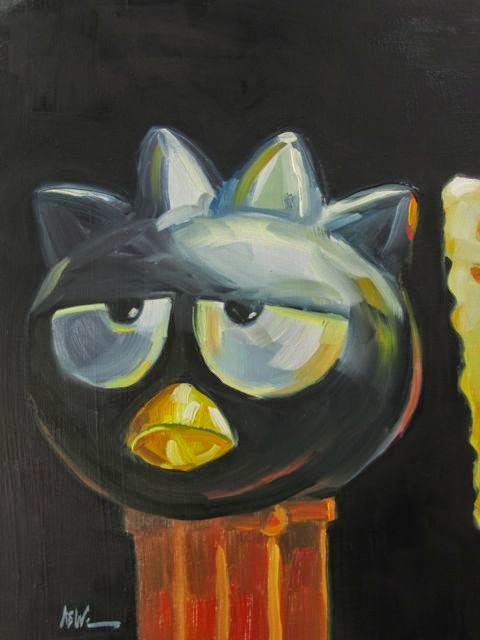 Badtz-Maru is one mischievous little penguin.
He lives with his mother and pinball playing
father in Gorgeoustown. Badtz-Maru dreams of
greatness when he grows up, but for now he rolls
his eyes at his humorous life in Gorgeoustown. 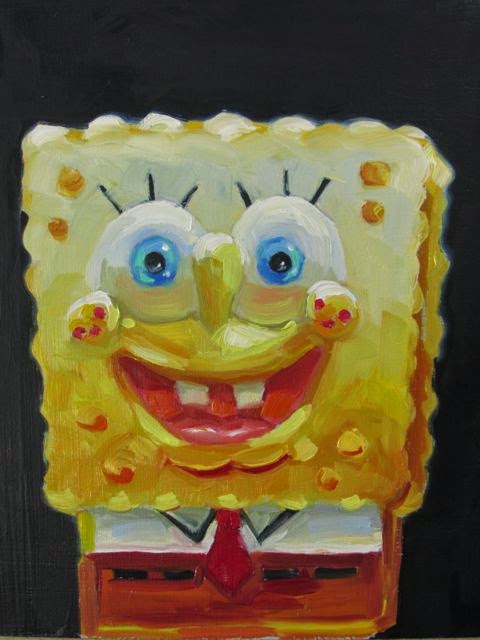 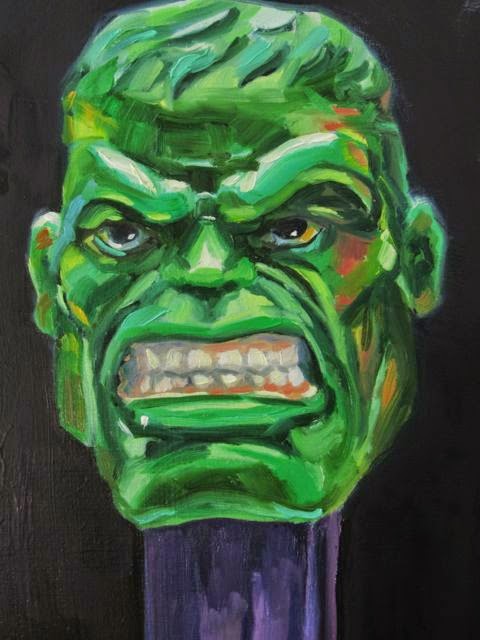 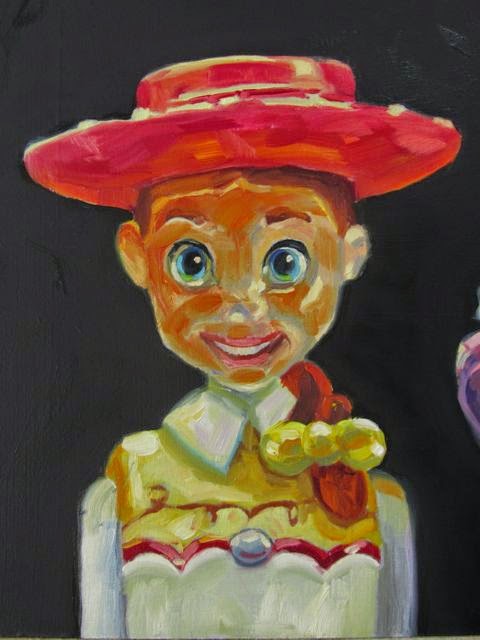 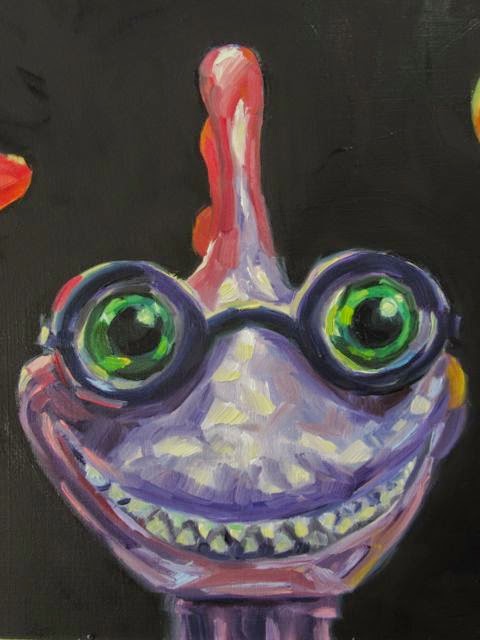 I can't believe I painted this as the first friday demo.
It was probably not the smartest choice - talk about pressure.
I thought it would be entertaining and fun but it didn't quite
work out that way. Can't explain it - maybe it was a bit too
racy! Anyway - it was a good lesson in humility.
I'm hoping I grabbed a few more followers - that would
make about ten now!!!
I would love it if you guys could pin or facebook these
paintings for me to try and get them out there.
I'm just not that good at the networking aspect of the
social media. I guess that's something I should work on???
I'd rather paint - or ski - or ride my bike.
Also, I have company coming so I should probably dust and
clean the house. Now there's something I really don't want to do!
Posts could be in short supply. We'll see.
Thanks for looking. 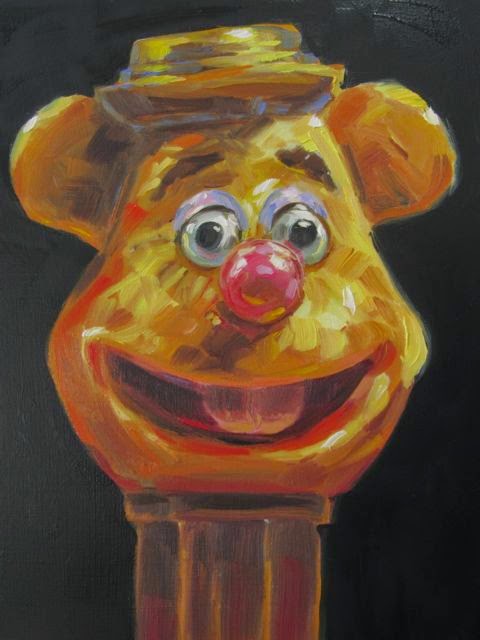 Here's the next Pez painting in parts.
Same size as the last one
8"h X 30"w
Some process shots below.
I am planning a third one but don't have the right cast of
characters but I have the title. That's how I work most of the time - the title first
and then the painting. 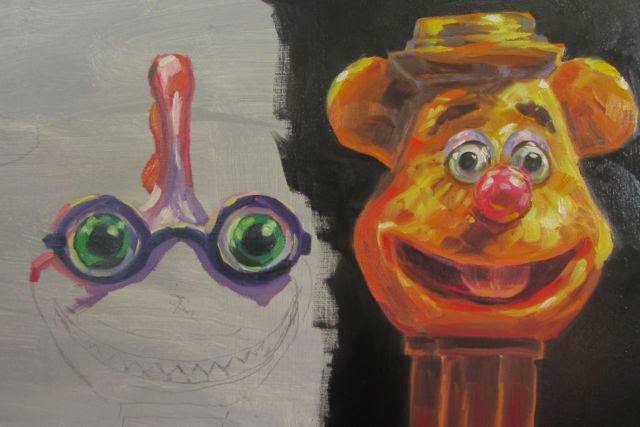 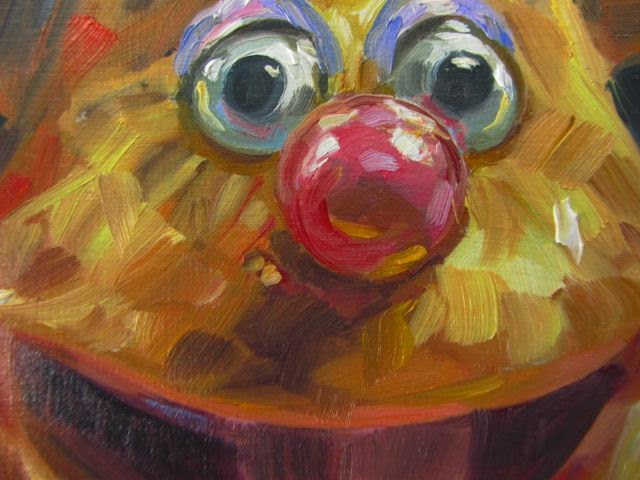 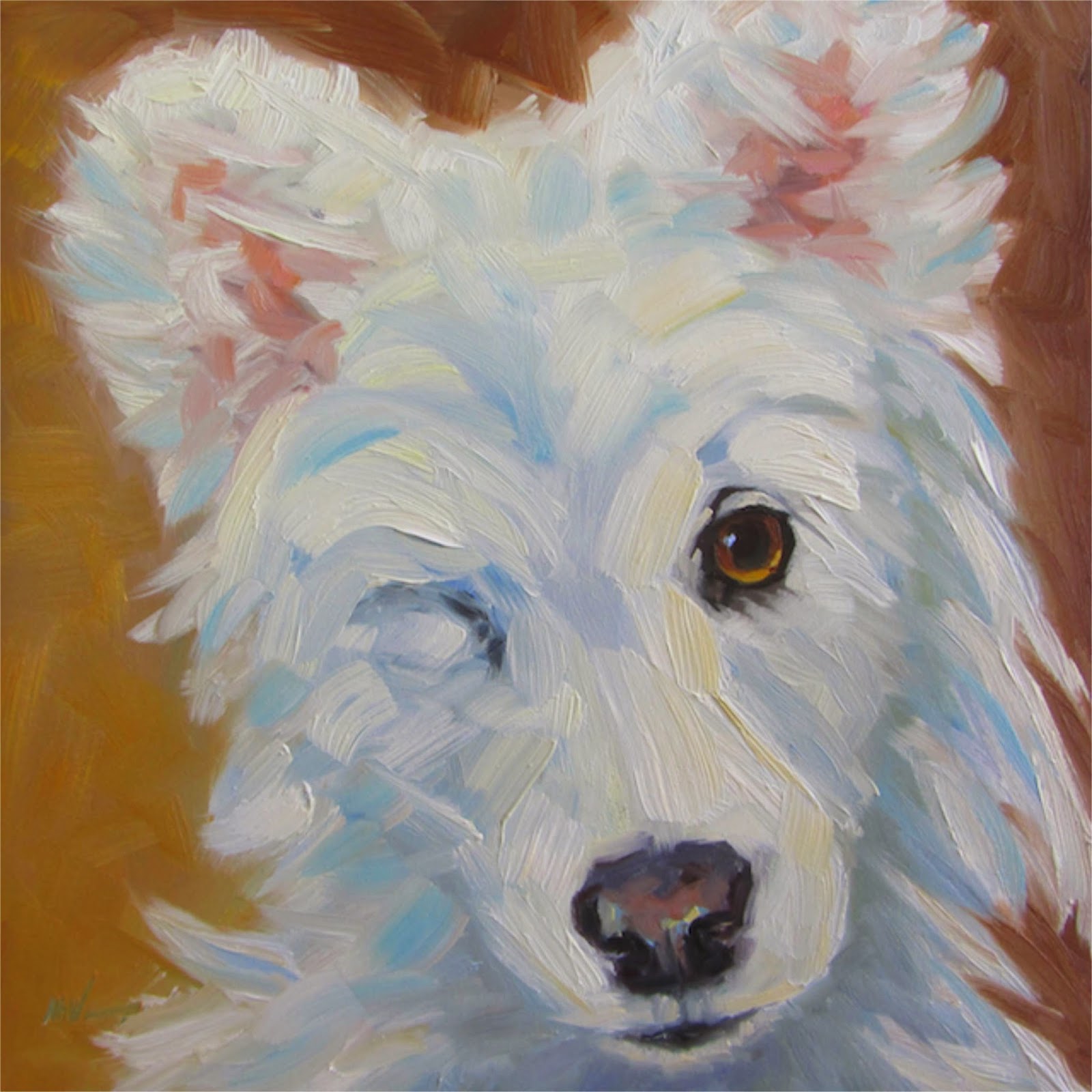 THE MIGHTY QUINN
Here's what Quinn's family says about him.
Quinn preferred to be "naked".
He was a diabetic and 9 days after he had cataract surgery,
Quinn developed glaucoma and eventually had to have his eye removed to rid the pain.
Quinn had many health issues but rose to each and every occasion and completely
fulfilled his registered name, "THE MIGHTY QUINN"(little
did we know that his name would describe him so well).
Quinn had a serious personality but had a very gentle soul.
He was not as outgoing as his goofy brother Kobe. I
always called him my nervous Nellie.
Quinn was lucky to have such a great family.
Thanks for looking, MB! 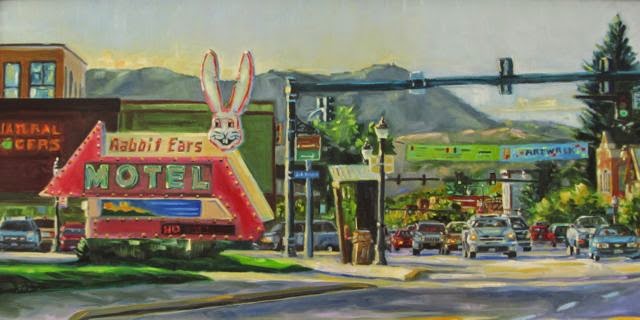 12"h X 24"w
oil on panel
I had so much fun painting this scene. Maybe it's out of my system.
I doubt it!
Have a great weekend and thanks for hanging in there. 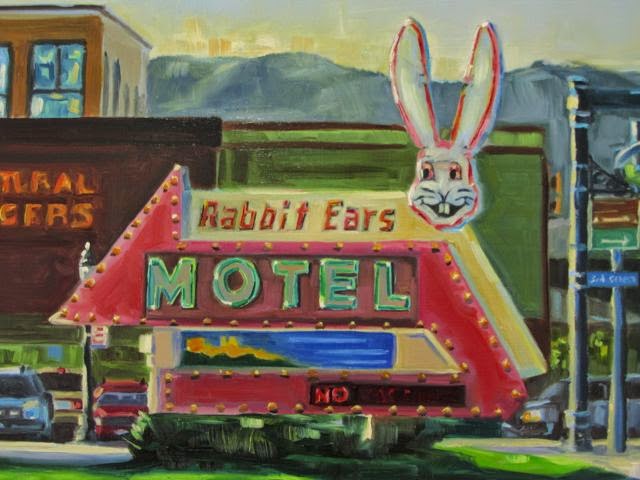 Another one of my favorite subjects - Rabbit Ears Motel sign.
Thanks for looking. 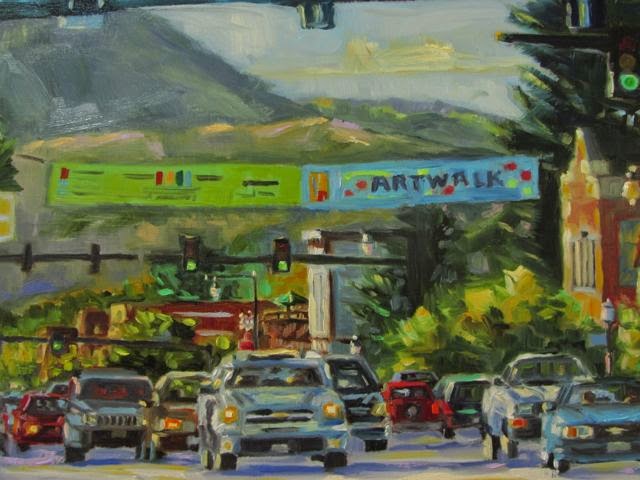 I've wanted to paint this painting on a larger scale for quite some time.
It's up at the gallery for the month of February.
Thanks 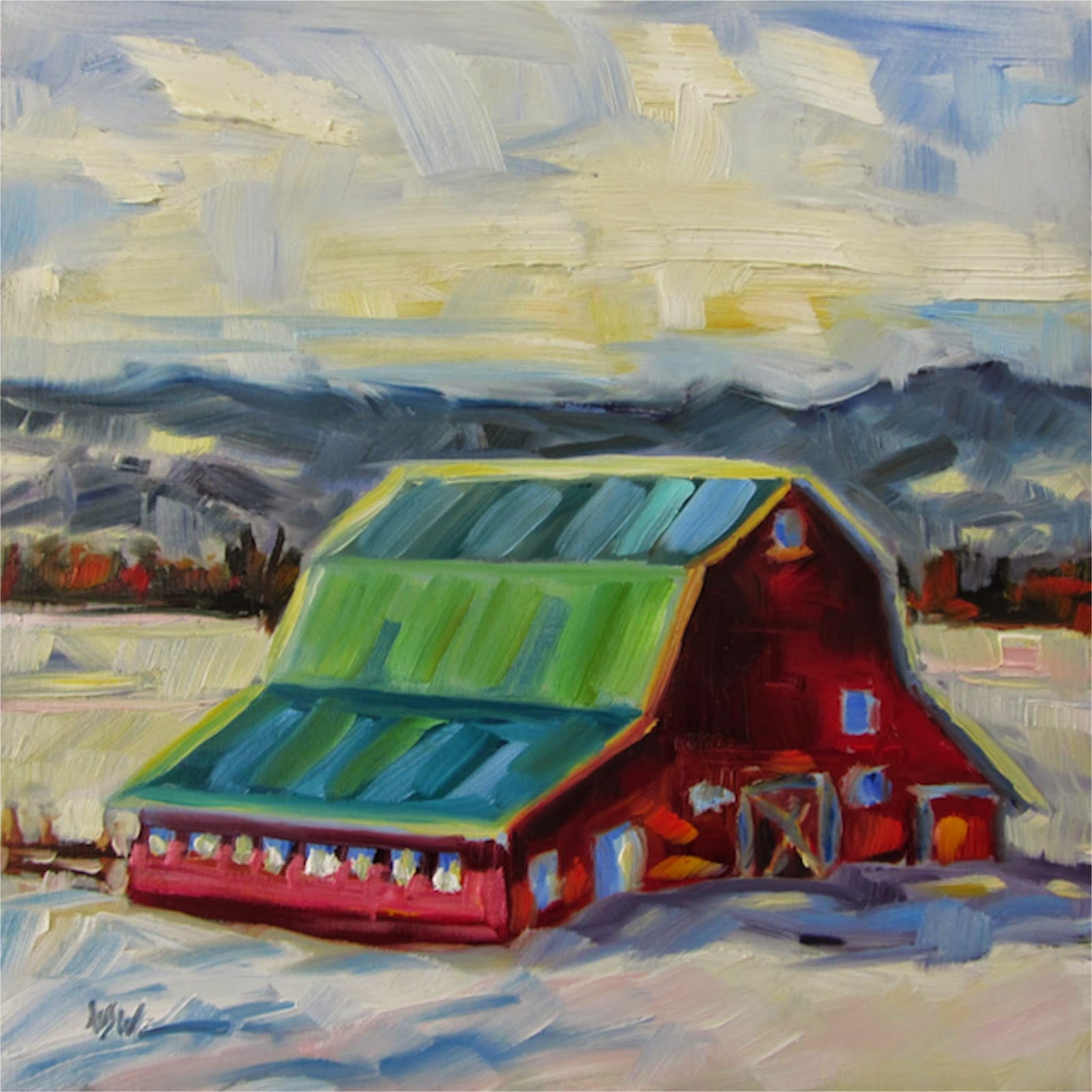 BARN
6" X 6"
I have a student coming to my studio for some refresher oil
painting lessons. She brings a photo and we paint side by side
painting the same image. It's an experiment for now we'll see
how it shakes out. This way she gets to paint what's close to
her heart and I get a challenge in the process.
It's been interesting. The first painting we did together I had to
wipe off after she left there was no saving it!
Thanks for following.