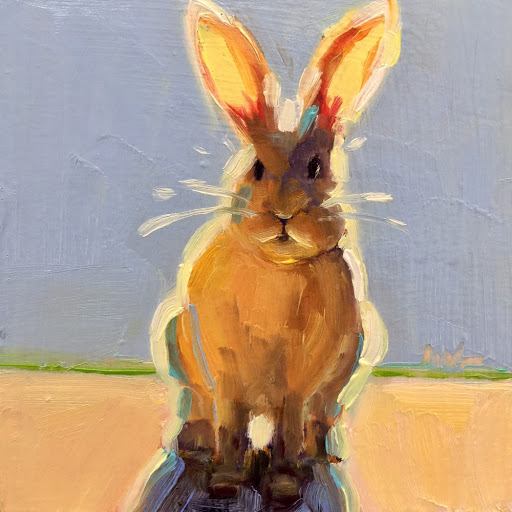 3" X 3"
Oil
Less is More Series continues just for fun.
These new paintings will be on display at
White Hart Gallery in Steamboat Springs as soon as they are dry.
I asked Cindy for some painting ideas, it was challenging to say the least.
She suggested bunnies, birds, chickens & nests.
Cindy Arnis owns White Hart Gallery, we make a pretty good team.
Thanks a bunch for looking - MB
Posted by MB WARNER/PAINTER at 9:46 PM 1 comment: 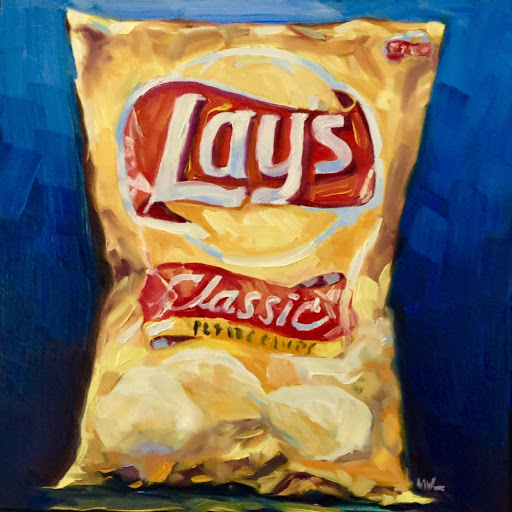 SOLD
This little 6 X 6 is a commission piece.
I can't tell you how hard it is to paint a little yellow potato chip bag.
I never knew that Lay's potato chips were a division of Pepsi-cola!
That's as much of the story as I can reveal you'll have to fill in the blanks.
Thanks a bunch MB
Posted by MB WARNER/PAINTER at 9:15 AM 1 comment: 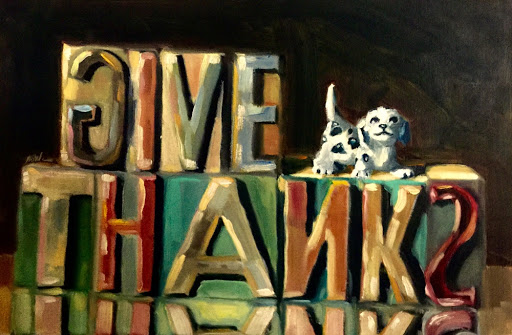 Wishing everyone a special day filled with friends & family
🏡☃🍰🍷🍮🍸🍦🍾
Thanks for all the encouragement & comments - MB
Posted by MB WARNER/PAINTER at 6:18 PM 1 comment: 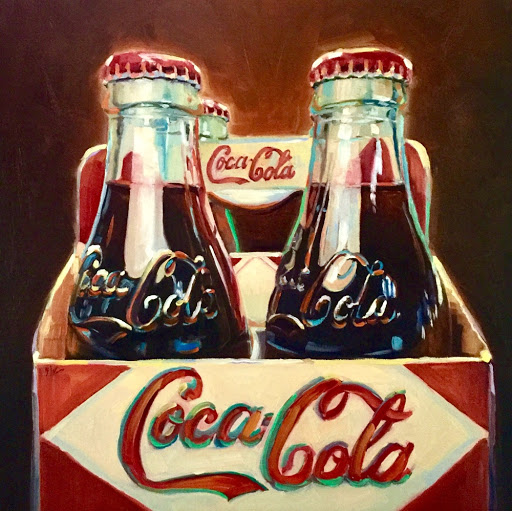 12 X 12
Oil
I love to paint coke bottles. I love the shape, the chosen script style and how the light hits the letters.
I may have already told you this story - when I was 10 I wrote to the Coca Cola company for a school
project I was presenting. The report was about the kola-nut. I think I asked if they could send me a sample
nut for my report. Anyway long story short - I received a personal response from a real person in the company.
He explained why they couldn't send me a kola-nut and wished me luck in my endeavors.
I still have that letter in its original envelope!!!! Go figure. I have moved and carried that envelope
to every location I have lived since I was 10. It's a mystery really. Why do we hang onto these memories?
Good question. I will take that letter out of my drawer and marvel at that old typewriter script and
the exquisite ink signature. I admire good penmanship because mine is atrocious.
The title to this painting pays homage to Andy Warhol one of my artist heroes.
My Disclaimer - I'm not advocating that you go out and buy some Coke. This
is not an endorsement for a product it's just an artists inspiration for line,color and form.
Thanks a bunch. It's going to be awhile for the next post. Getting ready for the show will
take more time than I can ever imagine.
Happy trails and thanks - MB
Posted by MB WARNER/PAINTER at 10:48 AM 1 comment: 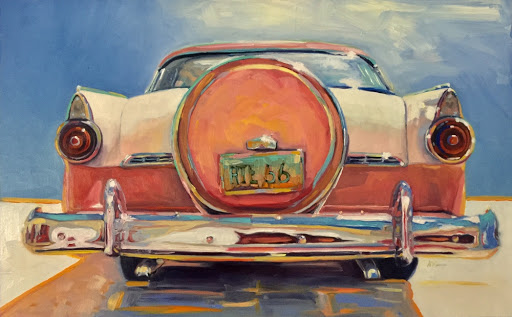 10 X 16
Oil
I love this car!
This is a 1955 Ford Fairlane Crown Victoria
You can find this car parked at Twisters in Williams, Arizona.
Twisters is a 50's diner on old Route 66. I've painted their neon ice cream cone
sign a number of times as well as the Crown Victoria. I'm drawn to the curves and colors.
I'm a sucker for the 50's - what can I say? The cars were beautiful and voluptuous at the
same time - those curves and chrome - a painters delight.
Thanks, one more to go later MB
Posted by MB WARNER/PAINTER at 8:58 AM 1 comment: 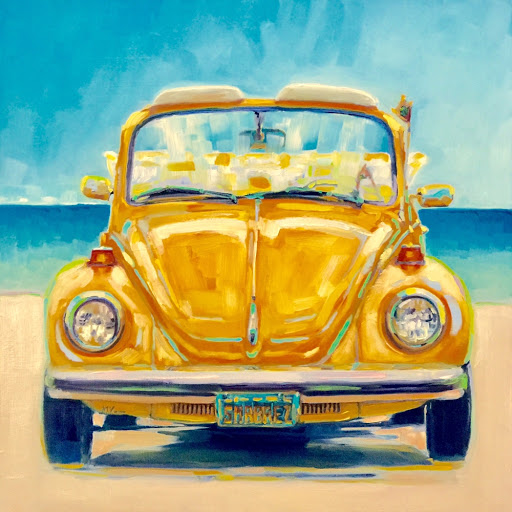 12" X 12"
Oil
I've painted this bug a number of times. I recently had a request for this view
of the beach bug. Not sure if they'll like it so it's a gamble on my part.
We'll see how it goes. I didn't get the best photo but thought I'd post anyway.
I have one more painting to finish for the December show. Woohoo!
My kitchen wall awaits.
Carrot Stick is the chosen color for my kitchen with Heirloom Tomato accents.
Along with some aqua and blue.
Thanks for following and thanks for all the great "Veteran" painting comments.
Later MB
Posted by MB WARNER/PAINTER at 5:05 PM 1 comment: 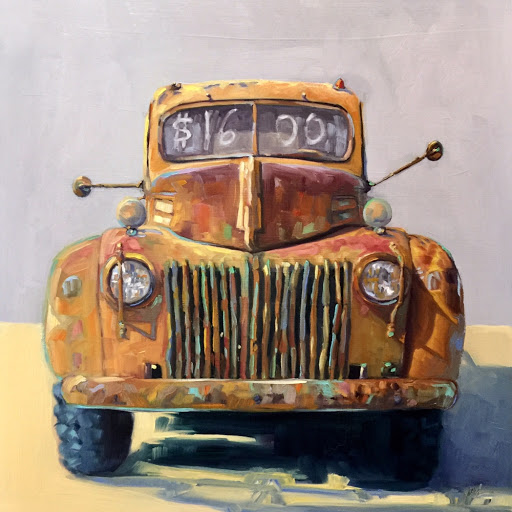 12" X 12"
Oil
When I saw this truck I had no idea what kind of history accompanied this vehicle.
I'm not known for painting old, rusty trucks, I'm attracted to reflective surfaces for the most part.
So why this truck? That's the million dollar question. Who knows why I stopped to admire
this WWII Veteran but I'm glad I stopped.
This 1943 Ford G8T was one of the ENGINES OF THE RED ARMY IN WWII.
These vehicles were Lend-Leased to the Red Army.
Here's a bit of history I found.
The wartime diversion of the automotive industry to other products
forced the Red Army to depend more heavily on Lend-Lease supplies than in nearly any other major
sector of the war economy. In total, the US, Britain and Canada provided the Red Army with
about 401,100 vehicles during the war, nearly twice the Soviet wartime production.
61,000 Ford G8T's were delivered between 1941 and May 1945.
A different website lists 78,000 G8T's delivered to the Red Army under the
Lend-Lease Act. After the end of the war many of these trucks ended up on US farms.
Who knew?
This painting has another title "Take Me Home" a Veteran in need of a respectful retirement.
Most of the G8T's for sale on the Internet mention they are looking for GOOD HOMES for their
trucks, they don't want them to be sold for scrap. There's a lot of emotion attached to these trucks.
Thanks for waiting MB
Ford G8T ("Ford-6"), 1½-ton, 4x2, Cargo

Equipped with a 158in. wheelbase and the common 144in. by 80 in. cargo body, the Ford G8T was by far the most numerous commercial 1.5t 4x2 truck and was delivered to Russia under the Lend-Lease Act from 1943 on.
Together with his civilian ancestor, the 2G8T, from which he differed in the engine type and some minor modifications, the total amount of delivery sums up to 61,000, making the »Ford-6« the second most delivered truck.
Posted by MB WARNER/PAINTER at 2:00 PM 2 comments: