"SHELBY I LOVE YOU" 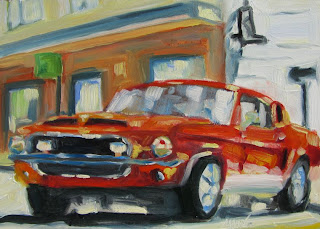 Here's something from the mustang roundup that never got posted.  I've been painting but have not had the right light to get photos. Crazy busy getting ready for Creekside show next week.
Thanks had have a great holiday weekend.
Posted by MB WARNER/PAINTER at 5:29 PM 1 comment:

"TOMATOES BY THE BUCKET" 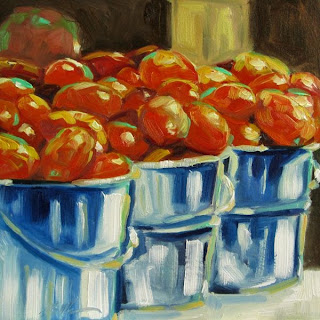 FARMERS MARKET
I have not produced a painting in days and couldn't figure out why. I think it was because my studio was a mess. I spent most of the day getting ready for my show next week and cleaning my space. I'm hoping for some production soon. Thanks for waiting.
MY WEBSITE
MY BLOG
Posted by MB WARNER/PAINTER at 8:40 PM 1 comment: 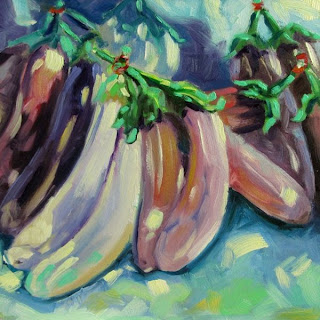 FARMERS MARKET
I bought some new colors and am trying to figure out how to use them successfully. I had been using a very limited palette for the last year - red - blue - yellow - white and maybe some sienna.  I can't believe I'm trying something new again and literally throwing myself under the bus. I may not be able to manage all that color - it's a mind bender for sure. Thanks for following.
MY WEBSITE
MY BLOG
Posted by MB WARNER/PAINTER at 3:40 PM 1 comment: 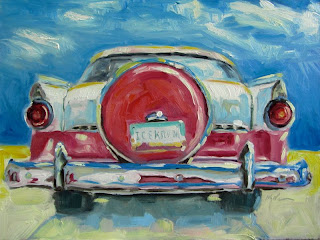 ROUTE 66 SERIES - FORD FAIRLANE
Love this car. You'll being seeing it again I'm sure.
MY WEBSITE
MY BLOG
Posted by MB WARNER/PAINTER at 5:47 PM 1 comment: 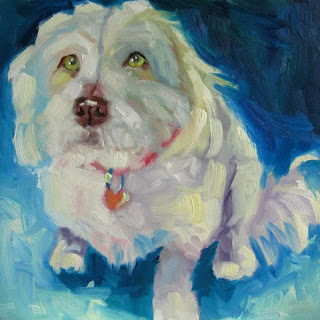 Peg is Cynthia's dog. Cynthia saved me from graduate school hell - long story short I was suppose to enter the painting department at CSULB - I did not get along with my painting advisor - Cynthia was the head of the printmaking department - she let me transfer into her department and gave me free reign to explore - painting - printmaking - sculpture! So this is a very belated thanks to her for making my graduate school experience a pleasant one(for the most part - doesn't mean it was easy)!
MY WEBSITE
MY BLOG
Posted by MB WARNER/PAINTER at 7:16 PM 2 comments: 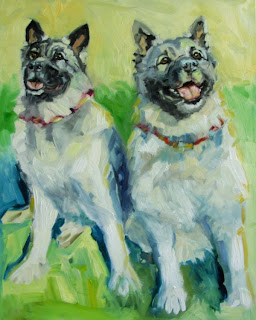 What they have in common as personalities: they are both very playful, very friendly, people loving dogs. Both love toys and ropes. They are too gentle to play "tug-a-war" with the ropes, but lead each other through the yard very gingerly, much like leash walking each other. This game can go on for long periods of times.

Shadow had an accident, which resulted in a broken his back at age 2 (he is now 8 years old). Due to the complex surgery and much prolonged pain, he grew up to be a more serious and cautious dog. He lost a big part of his careless nature with strangers, but is still a happy-go-lucky dog with everyone he knows and trusts.

Oslo is 2 years old and never had a bad experience in his life. He loves EVERYONE and everything, plays all day long, often even just alone with his own toys. Shadow used to be like that before his accident and Oslo has helped him to regain some of his playfulness.

Both dogs are with us 24/7, we are outdoor people and both dogs climb mountains with us, 14ers, AT the backcountry and backpack with us too. We are one active family.
Posted by MB WARNER/PAINTER at 3:23 PM 1 comment: 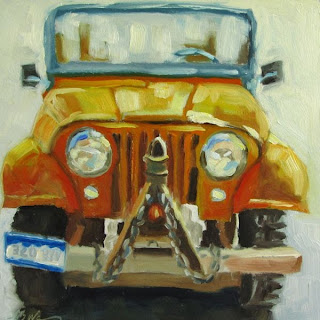 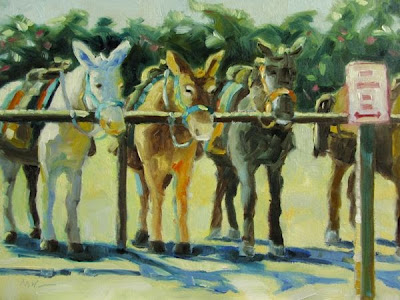 GOTTA HAVE SOME FUN!
MY WEBSITE
MY BLOG
Posted by MB WARNER/PAINTER at 7:02 PM 2 comments: 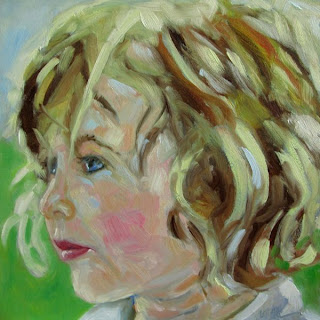 OK -  I was so afraid I wouldn't be able to paint anything without a fur coat I had to give this sweety a try. She's a surprise!
I'm going to try and control my posts to 3 a week. We'll see how that goes.
MY WEBSITE(which needs some tender loving care)
MY BLOG
Posted by MB WARNER/PAINTER at 5:08 PM 1 comment: 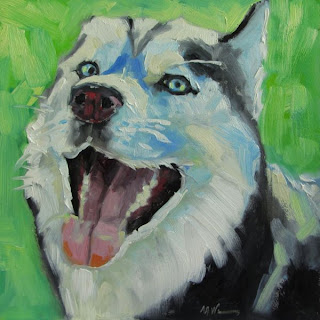 KEEGAN GETS IT!
OK so I'm finished - with my brush in hand - painting like a mad woman - one painting at a time - lying awake at night wondering if it's good enough - painting 60 portraits - yes 60 - counting all the ones that got erased  - started over - redone - and redone again! With Marilyn's help - I raised 3000.00 for the RCHS.
Thanks to Marilyn for coordinating donors, keeping me on track and getting this thing off the ground running. She kept me going when things got weird and tough!

I owe many thanks to people like Nancy. Nancy commented on every portrait - everyday - religiously - no matter how busy she was - or where she was - keeping me going with her thoughts - I really couldn't have finished without this incredible, thought provoking, daily support!

My great followers, friends and family(all 5 of you) also made a huge impact on my performance and dedication to this project. I was ready to quit more than once but was prodded to keep it together. These portraits probably look like they took minutes to create but that couldn't be further from the truth. They are 25 years in the making.

Have a great weekend - thanks for following and thanks for supporting the RCHS! 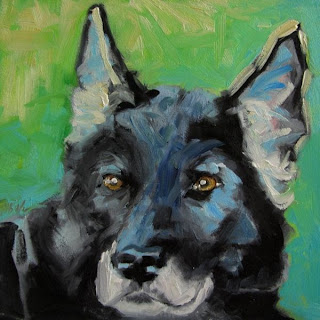 SWEET - SOULFUL - PEACEFUL - KIND - CALM - UNASSUMING
Cody is a dog that we got when he was elderly. We don’t know too much about him except that his old owners took him to the vet to be euthanized and the vet said they don’t do convenience euthanasia and so he was surrendered to the vet who then took him to the shelter. He did terribly at the shelter, wailed and was very nervous all the time. I couldn’t bear it so I brought him home.

We fostered him, and though we fell in love, we thought 4 dogs was too much, so when someone wanted to adopt him we thought it was best for Cody. Unfortunately, it wasn’t. After a year, she didn’t really want him anymore and so we took him back and have decided that he will live the rest of his life with us. He is still very nervous. Has separation issues and follows me around quite a bit.

Cody is soulful and peaceful (when he isn’t nervous). He shuffles along on the walks and is starting to come out of his shell. He seems likes to try new things. When I cut up veggies, I give some to whoever is interested and he has become very interested! He loves food! So far, he likes avocado, carrots, and watermelon! He still spits out bananas and apples?? He is very sweet and has started coming up and resting his head in our laps wanting to have his head rubbed (that’s new) and he flinches a lot less now when we touch him.

We haven’t had him very long, so we don’t know him very well, but we love him and want him to know that he is safe and loved. We look forward to the day he is secure because right now he is still insecure.

Being insecure does not, however, stop him from being a great guard dog (Cody and Farrah alert us to everything happening at the end of our driveway!) He is kind, calm, unassuming and brings peace to the pack. Cody is a HUGE dreamer. His legs go crazy when he sleeps – I always wonder if he is chasing or being chased! I hope they are good dreams.
Posted by MB WARNER/PAINTER at 6:05 PM 1 comment: 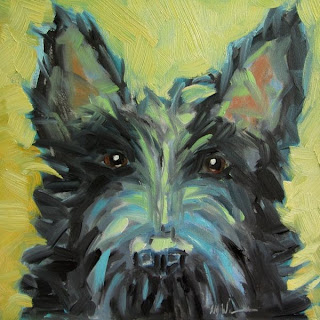 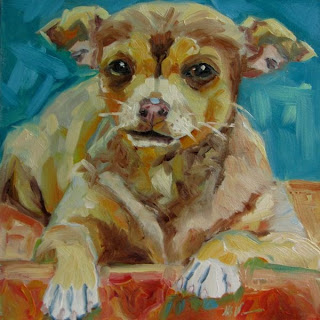 FIERCELY LOYAL
Story told by her family
So Farrah is our little peanut! Unlike Keegan, she pranced right into the house, looked around and said, “yup, this’ll work!” That is until my husband got home and she was like, “wait a minute, I didn’t know he came with the deal!” She immediately trusted me, it took my husband a little longer, but then the little booger defected! She loves her daddy! And her food! She was 4 pounds when we got her, now she is 10 pounds!

Bob calls Farrah her little angel. She is fiercely loyal. He has been sick (long story) going on a year now and Farrah has been by his side every waking moment. She is tough as nails, survived being lost in a snow storm in January for three days before we adopted her (some people just shouldn’t be allowed to have dogs)!! She has no idea she is a Chihuahua, she’s certain she is a husky, until it’s 20 below out then she knows she’s something other than a husky! Bosses Keegan around. Guard dog extraordinaire. Yet, she’s a total snuggler and has love to give a million times her size (to us). She has learned to love kids, is ok with women but after all these years is still very leery of men; that relationship must be earned with any man that walks through our door. She is smart, sassy, incredibly sweet and a has provided us more comfort than we knew imaginable from a dog.
Posted by MB WARNER/PAINTER at 7:10 PM 1 comment: 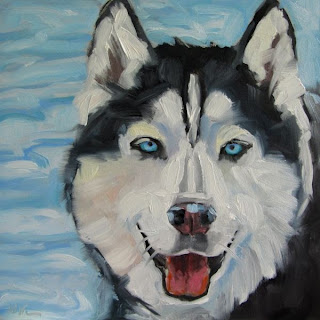 Keegan is my boy. He sleeps next to me and we have a special/strong bond that I don’t know how to describe. When we adopted him he bit me, was aggressive towards me and honestly he scared me. It was so bad that we tried re-homing him. But I cried every day he was gone so we took him back. Long story short, we worked through it, with the help of a trainer. Took him a full year to turn the corner, but when he finally did he was like a new dog. After a year of not trusting us he let us in 100%  and now he is a total lover boy.

First and foremost, Keegan is a survivor and a forgiver. He is very friendly and super playful. He loves to be a part of whatever action there is and is always close by, so as to not miss anything and feel included. He is very curious and somewhat mischievous. He’s and a big talker like some huskies are and says I love you. He finds much comfort in his routine. He acts tough, but he’s really kind of a big baby. He is very handsome, but has no idea. He “works” hard when asked and aims to please. ……He’s my big “baby” boy.
Posted by MB WARNER/PAINTER at 7:21 PM 1 comment: 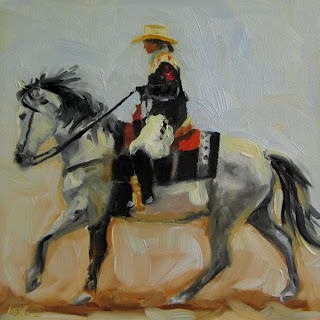 SMART - ATHLETIC
At times Vino has a Type A personality when doing arena work. Loves activities such as jumping etc.  He is an easy going guy on trail rides. Vino loves people and attention - his favorite thing is having his face rubbed or petted. He will fall asleep while my granddaughter pets and rubs his head.
OK - I admit this is a different type of portrait but it seemed fitting for the subject and his demeanor.
I loved painting something a little different and hope Vino likes what how I portrayed him in the arena. I love this little painting.
Posted by MB WARNER/PAINTER at 6:19 PM 1 comment: 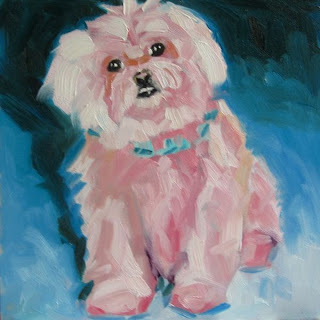 HAPPY BIRTHDAY TO YOU!
Posted by MB WARNER/PAINTER at 7:54 PM 2 comments: