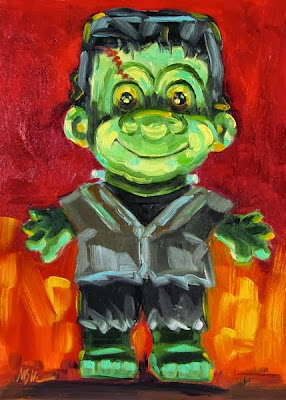 HAVE A SPOOKY GOOD TIME!
Posted by MB WARNER/PAINTER at 6:56 AM 1 comment: 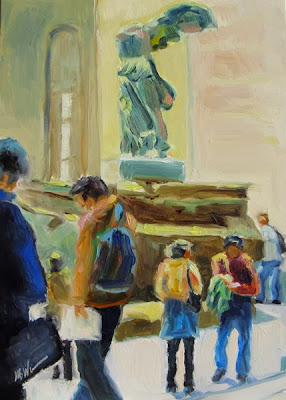 "WINGED VICTORY OF SAMOTHRACE"
AT THE LOUVRE
THAT'S IN PARIS - FRANCE
A presentation mixing grandeur and theatricality
This exceptional monument was unearthed in 1863 on the small island of Samothrace in the northwest Aegean. It was discovered by Charles Champoiseau, French Vice-Consul to Adrianople (Turkey). The goddess of Victory (Nike, in Greek) is shown in the form of a winged woman standing on the prow of a ship, braced against the strong wind blowing through her garments. With her right hand cupped around her mouth, she announced the event she was dedicated to commemorate. The colossal work was placed in a rock niche that had been dug into a hill; it overlooked the theater of the Sanctuary of the Great Gods. This niche may also have contained a pool filled with water in which the ship appeared to float. Given its placement, the work was meant to be viewed from the front left-hand side; this explains the disparity in sculpting technique, the right side of the body being much less detailed. The highly theatrical presentation-combined with the goddess's monumentality, wide wingspan, and the vigor of her forward-thrusting body-reinforces the reality of the scene.
I went to the "Passport to Paris" show at the Denver Art Museum on sunday. It was a spur of the moment kind of thing -
A beautiful day for driving. That said it's an OK show - nothing to write home about. It might be because I'm so jaded - you may have to judge for yourself if you happen to be in Denver for some other activity it would be worth a stop but not a drive just to see it. It did make me want to transport myself to the Louvre though - so I got out some old photos of trips to Paris and here's the first painting ever of my time there. I love the Louvre!
Thanks for following.
Posted by MB WARNER/PAINTER at 4:46 PM 1 comment: 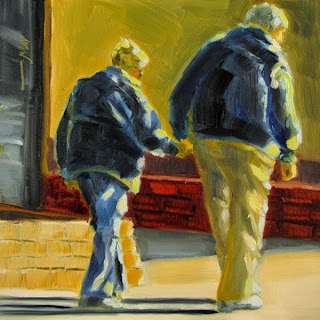 "ROSIE THE OTHER JUNK YARD DOG" 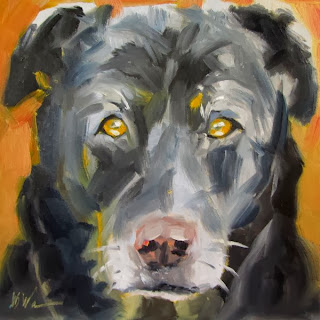 CINDY'S SISTER ROSIE
MY WEBSITE
(I've started to fix it but I have a long way to go)
Posted by MB WARNER/PAINTER at 6:46 PM 1 comment: 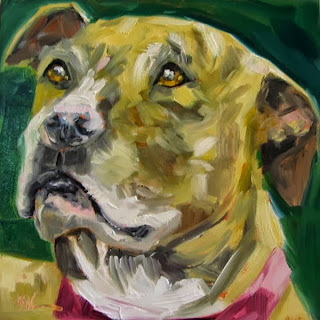 CINDY
You know those signs you see hanging on the fence in big red letters "BEWARE OF DOG"
well Cindy is the one behind the fence. When we were in denver we went to Couch Engineering. Cindy and her pal Rosie are the Go to Gals at Couch Engineering - Jay Couch is the go to guy!
With over 22 years of hands-on experience working with Unimogs and other 4WD vehicles in the United States and abroad, owner, Couch, is known by his peers as the "Go-To Guy" for authoritative answers and advice. This level of experience saves you time and money, as issues are diagnosed quickly, and solutions are put into place before any potential problems ever arise. Corners are never cut, as C.O.R.E.'s level of high quality work is truly unparalleled. Click on this link for more info.  COUCH ENGINEERING
We spent the afternoon perusing the unimog junk yard - talking shop - and having a good old time with Cindy!
Posted by MB WARNER/PAINTER at 6:08 PM 1 comment: 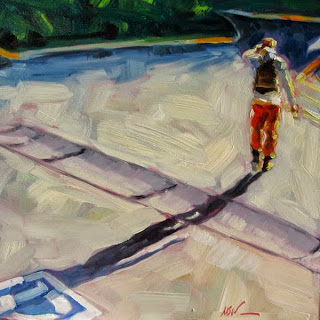 ''FALL SHADOWS"
This was a scene outside our hotel. I just couldn't resist. There should be some more sunday morning paintings in the series coming soon. It was such a beautiful morning with the long fall shadows and intense morning light. Stay tuned.
Thanks for following!
MY WEBSITE
MY BLOG
Posted by MB WARNER/PAINTER at 6:27 PM 1 comment: 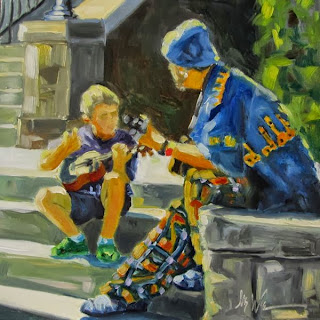 DENVER TEMPLE EVENTS CENTER UKULELE FESTIVAL
Oct. 10 - 12th we went down to Denver to attend the Ukulele Festival. These two ukulele enthusiasts were jamming on the steps of the Temple Events Center. It was during our lunch break and it was the first time the sun had come out all weekend. We heard some new bands that we really love and the workshops we attended were well worth the time. It was a fun time!
Thanks for following!
Posted by MB WARNER/PAINTER at 5:38 PM 1 comment: 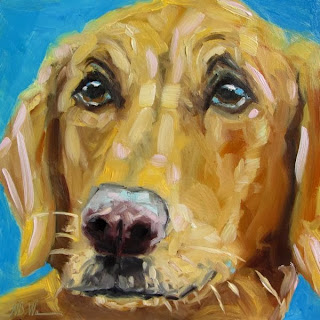 Sadie is a 6 year kid Labrador/greyhound mutt we adopted from the humane society around 5 years ago. At the time we had a miniature dachshund and Sadie quickly became the submissive one in the relationship, despite her 40lb advantage! Sadie loves playing fetch (although she has not mastered bringing the ball back...) and loves running up and down our dock. She is a HUGE lap dog (we don't think she knows her size) and readily climbs into your lap to take a nap. Her favorite treat is lettuce and she runs from bed (usually my bed) to the kitchen whenever she hears salads being made!

The dogs are considered family members and very spoiled!
They are very loved!! 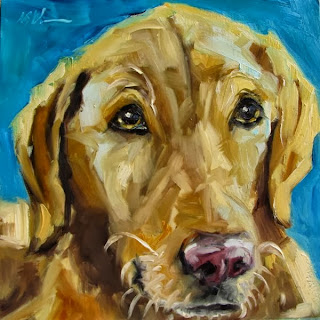 So - I couldn't decide which pose I liked better so I painted 2. The client(boy does that sound important)
chose the first portrait. I still like them both. I love to paint and I'm so lucky I get to do what I love!
Thanks for following!

Nellie's owner says:
Our miniature dachshund passed away last summer, which led to us adopting Nellie from the humane society last fall. She is a pomeranian and papillon mix around 2 years old. She wasn't potty trained when we first brought her home, but the gate we bought to keep her in the kitchen did not work, as she effortlessly jumps over it. She has been nicknamed Houdini, as she can also jump over our backyard fence, onto beds, and onto the bathroom counter. Sadie cries with joy whenever a stranger comes to the house, hoping to be pet. Nellie is definitely the more ferocious guard dog, as she barks at almost anything foreign- including large dogs and strangers!
Posted by MB WARNER/PAINTER at 6:38 PM No comments: 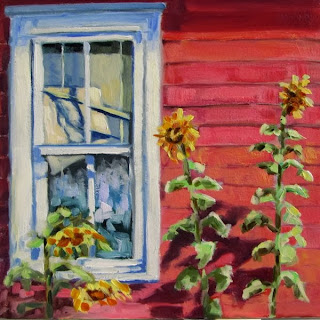 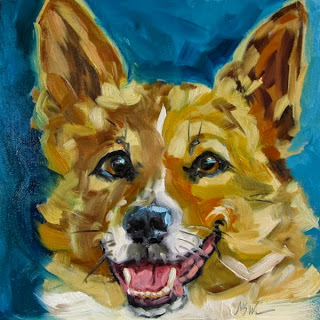 I needed a self portrait today and I don't have one.
I thought Georgi would make a great choice
for what I had in mind
Besides he needed his portrait painted because he's the best dog!
Below is my new PR photo.
I've had 4 successful days of painting more coming your way 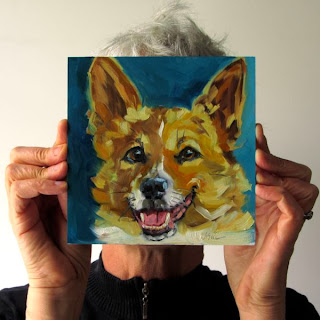 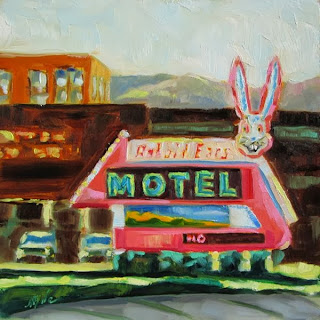 RABBIT EARS MOTEL
This one is my usual 6"X6" - I'm not going to post until next monday or tuesday.
I hope this silly rabbit holds you over!
Thanks for following - MB
Posted by MB WARNER/PAINTER at 4:31 PM 1 comment: 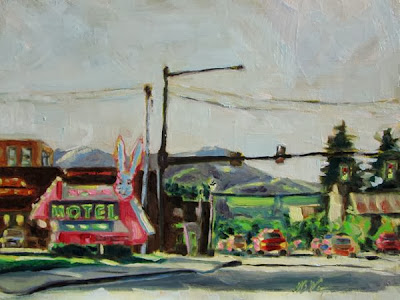 "STEAMBOAT STYLE"
OK it's been a while and I have no real reason other than life seems to get in the way.
I have some 6" X 8" gessoboards and I'm having some fun with them. I've always wanted to paint the Rabbit Ears motel sign so here it is and there will be another.
I have 2 shows lined up for next year - Harwigs in March and Creekside in October. I'm gearing up for those events because I want the shows to have a specific theme and paint in series. Harwigs will be called "HORSEPOWER" and Creekside will be "CHICAGO" things could change but that's what I'm thinking right now. Stay tuned!
Thanks for following
Posted by MB WARNER/PAINTER at 5:51 PM 1 comment: 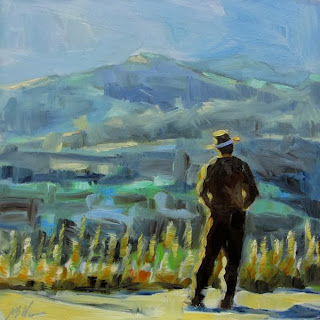 We went to the last sunset happy hour at the top of the gondola last week. We had so much fun we plan do do every sunset happy hour next year. For 12 bucks you get a ride up the gondola - 5 dollar credit for food and there's a live band and an incredible sunset to boot.
This guy was enjoying the view of town and the warm glow of the sun. I just couldn't resist. I loved his outfit as well as the outline of light. What a joy! Thanks for following. 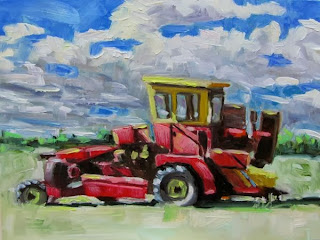 6" X 8"
I pass this new holland every day that I ride my bike out river road. Today I stopped to take a picture and decided it was time to give it a go. Thanks for following.