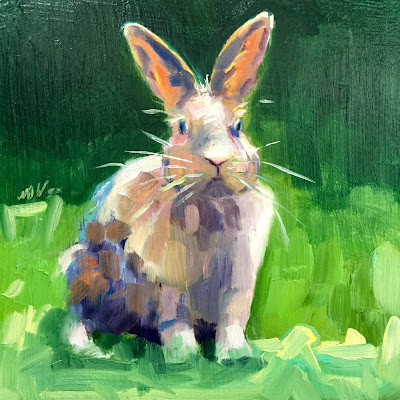 4” X 4”
Oil
SOLD
His original name was patches but somewhere along the way he lost his patches
of color. I can’t explain how he lost his patches, so he became Bunny Rabbit instead.
Sometimes I try to paint harder edges, defining the idea but then I look at it and it
feels wrong. So I end up with a patchless(I doubt that’s even close to a word)
bunny. Then I wonder if I should frame it?! I usually end up bringing it to the gallery
anyway because I thought he was kinda cute and voila somebody takes him home.
Thanks a bunch of 🥕🥕🥕🥕 MB