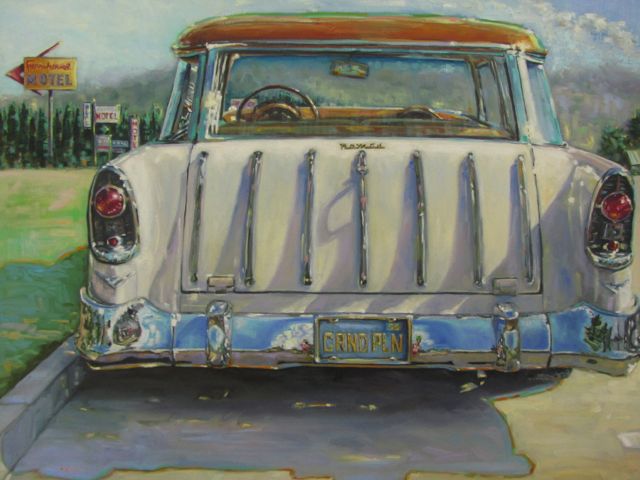 This is a 1956 Chevy Nomad. This painting went through many titles - in 1956 Chevy advertised
this vehicle as "THE HOT ONE" because the boxy new Chevy was crisp, clean and thoroughly
modern-looking. Nomads like Bel Airs came fully loaded - and the beat goes on
I was going to name the painting the Hot One or the FAHA(Federal Aid Highway Act)
but somewhere on the unreliable wikipedia page Eisenhower referred to the highway
act as "The Grand Plan" hence the vanity plate that really didn't exist in 1956.
Artistic license one more time. This might be too much info but some of you may enjoy
a little banter. Thanks for looking and waiting again.
New project on the way and it's much smaller.
Let's hope for more posts.
I have not had much time to respond to all my emails about this car but thanks for all the thoughts.
These old cars are pure art and important reminders of Car Culture in the US of A.
My dad bought an Edsel - that's another story!

On June 29, 1956, President Dwight Eisenhower signed the Federal-Aid Highway Act of 1956. The bill created a 41,000-mile “National System of Interstate and Defense Highways” that would, according to Eisenhower, eliminate unsafe roads, inefficient routes, traffic jams and all of the other things that got in the way of “speedy, safe transcontinental travel.” At the same time, highway advocates argued, “in case of atomic attack on our key cities, the road net [would] permit quick evacuation of target areas.” For all of these reasons, the 1956 law declared that the construction of an elaborate expressway system was “essential to the national interest.”

Posted by MB WARNER/PAINTER at 5:36 PM